When James Addison Bates was born in 1793 in Washington, Kentucky, his father, Matthew, was 22 and his mother, Judith, was 19. He had two sons from one relationship. He then married Elizabeth Coppedge and they had 11 children together. He died in January 1837 in Pulaski, Missouri, at the age of 44. 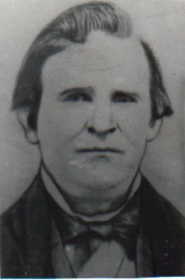 James Addison Bates was living in Springfield, Kentucky around the time it was shaken by the most powerful earthquakes to ever hit the Midwest.

During the winter of 1811–1812 Arkansas, Missouri, Tennessee, and Kentucky experienced one of the most shocking natural disasters in North America. The four earthquakes that took place in December, January, and February affected the landscape more than any other earthquake on the continent. Eyewitnesses recalled the ground “rolling in waves” and the river rising up “like a great loaf of bread.” The incredible magnitude of the earthquakes affected an area ten times larger than that of the infamous San Francisco earthquake in 1906; bells trembled in their towers and chimneys shook more than 190 miles away from the center of the quake in New Madrid, Missouri. Due to its rural location, the death toll was mercifully low, but for those who felt the shakes, it was an event never to be forgotten. Eliza Bryan, a citizen of new Madrid, described “the screams of the affrighted inhabitants running to and fro, not knowing where to go, or what to do … a scene truly horrible.”